Several years ago National Geographic magazine published an article on oil that included a stunning photo of mature steer and the barrels of oil needed to grow an animal to that size.  I recently went looking for that picture, found it, and post it here because it hasn’t lost its impact or relevance one bit.

Here’s the caption that accompanies that photo:

Weighing in at 1,250 pounds (567 kilograms), Marina Wilson’s champion steer Grandview Rebel is ready for auction at a county fair in Maryland. Raising this steer has taken an agricultural investment equal to 283 gallons (1,071 liters) of oil, represented here by the red drums. That includes everything from fertilizers on cornfields to the diesel that runs machinery on the farm. Overall, it takes three-quarters of a gallon of oil to produce a pound of beef.

Yowza!  Three quarters of a gallon of oil to produce a pound of beef.  At $4.00 per gallon, this implies the cost of a pound of beef includes $3.00 worth of oil.

In reality, the oil is used for illustrative purposes only.  The energy in the food systems comes from many sources, such as natural gas for fertilizer and drying grains, and the electric grid for almost everything. Broadly, however, industrial energy sources tend to have correlated prices and oil is considered the lynch pin since it is involved in the transportation of all goods, including energy inputs.

Given the heavy use of oil in the food system wouldn’t you expect oil and food prices to correlate?  Well they certainly do. 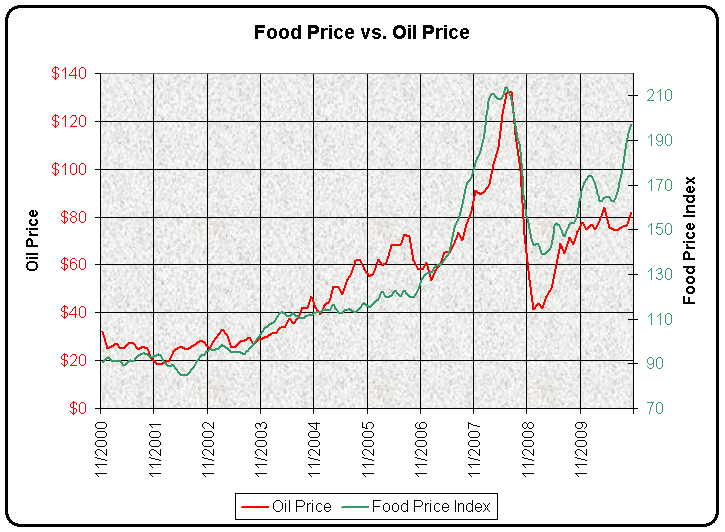 The above graph comes from the web site of Paul Chefurka and derives from easy to get, publicly available data from the UN Food and Agriculture Organization and the US Energy Information Agency.

While the price correlation is stunning, the big picture is even more interesting.  Let’s look at this again from an energy perspective by comparing the energy content of one pound of meat with the 3/4 gallon of oil that goes into it.  3/4 gallons of oil is equivalent to 0.11 Giga Joules (GJ) of energy.  A pound of meat averages about 1000 kilo calories, which equals a measly 0.0042 GJ.

Twenty six (26) units of fossil fuel energy goes into producing one (1) unit of food energy in the form of beef.

Agriculture was created as the primary way civilizations harness the energy that allows them to do work. Now, however, agriculture is simply another fossil fuel conversion system.  While these fuels provide us with tremendous labor efficiency, we can no longer say we have an energy efficient way to make food since food production is now an energy sink.

Given the volatile and generally rising trends in energy costs, I believe we are in a transition between two periods.  For the past several decades, fossil fuels could be counted on as readily available and cheap, which is what built the system we have.  These non-renewable stocks have depleted to the point where we may no longer get the historic rates of flow we’ve depended on.  Look ahead a bit then, and an advantage goes to systems that build renewable stocks and capture and convert renewable flows of energy.

In simple terms, this defines the need for sustainable agriculture.  The renewable stocks we need to build include fertile topsoil.  And the flows come from what plants, animals, fungi and microbes do with soil, water and sunlight.

Well, that’s the big picture.  And if you want to learn the details of how this is done then this blog will be a worthwhile read.

8 thoughts on “Oil and Food Prices”